Despite the persistently strong impact of the coronavirus pandemic and the associated bottlenecks in the procurement of raw materials, Sika was able to continue on its consistent growth trajectory – closing the first nine months of 2021 with record results. Sales rose sharply to a record figure of CHF 6,862.7 million, corresponding to a growth of 18.1% in local currencies. The currency effect was 0.1%. The acquisition effect after nine months was 1.3%, resulting in an organic growth in the reporting period of 16.8%. Compared with the same period in 2019, organic growth was at 10.2%.

Access to the webcast and replays are available under the following link.

"Sika has great potential for further growth and long-term success due to our position as a global leader with a market share of around 10 percent, megatrends driving our key markets, and an unprecedented need for sustainable solutions to meet the challenging global climate goals." Thomas Hasler, Chief Executive Officer

The sharp rise in raw material costs led to a lower gross margin of 52.6% in the first nine months (previous year: 54.6%). Economies of scale were realized thanks to higher volume, an increase in prices, and targeted efficiency gains in production workflows. The operating profit margin increased significantly to 15.4% (previous year: 13.7%) with operating profit (EBIT) rising to a new record of CHF 1,054.0 million (previous year: CHF 797.1 million) – up 32.2% compared to the previous year’s period. In addition to economies of scale, EBIT was positively impacted by productivity-enhancing measures and synergies related to acquisitions. Net profit increased to CHF 765.1 million (previous year: CHF 561.5 million).

DOUBLE-DIGIT GROWTH IN ALL REGIONS

The coronavirus pandemic continues to have a strong impact on business performance in all regions. Renewed lockdowns in parts of Asia are affecting global supply chains. Thanks to its strong market position and innovative products, Sika was able to increase its market share in all regions.

The EMEA region (Europe, Middle East, Africa) reported a sales increase in local currencies of 17.6% for the first nine months (previous year: 3.8%). As in the previous year, growth in the distribution and renovation business outstripped growth in the other business segments. The private residential sector in particular, posted a highly dynamic performance. Almost all countries in the region achieved double-digit growth rates. Eastern Europe, including Russia, Romania, Serbia, and the Czech Republic benefited from a surge in growth – as well as the United Kingdom and countries in Africa. In general, purchases of Sika product solutions via e-commerce platforms saw an above-average increase.

The Americas region recorded growth in local currencies of 19.3% (previous year: 0.9%). Despite a challenging supply chain situation, the region returned to clear double-digit growth. Mexico, Colombia, Brazil, Peru, and Chile performed very strongly, while business in the United States gained momentum. Growth drivers were large-scale maintenance and new-build projects in the area of distribution and data centers. In the Americas region the strategic focus of business activities on big cities and urban centers paid off, as did the concentration on major infrastructure projects and successful cross-selling.

Sales in local currencies in the Asia/Pacific region increased by 20.7% (previous year: 13.9%). China in particular enjoyed a strong continuous momentum, with double-digit organic growth rates due to large number of infrastructure projects and strong sales in the distribution business. India continues its dynamic performance, while South-East Asian countries, above all Vietnam, Malaysia, and Thailand, are suffering from renewed lockdowns. The trend in Japan remains challenging. Its closed borders policy is increasingly affecting the construction industry, and new projects are being postponed.

In the Global Business segment Sika achieved growth in local currencies of 9.9% (previous year:  -16.1%). In the first nine months of the year, the automotive industry suffered from major bottlenecks in the electronic-component supply chain. Whereas at the beginning of the year car manufacturers were still expecting the volumes of new cars built to substantially recover compared to the previous year, these declined sharply in the third quarter due to the limited availability of semiconductor components. Given these circumstances, the automotive industry is expecting zero growth by the end of the year. Sika anticipates sustained growth stimuli from the megatrends evident in modern automotive production: electromobility and lightweight construction. Notably, the transition from traditional drive systems to electromobility picked up momentum during the pandemic, thanks to various support programs in a number of countries.

Patricia Heidtman will succeed Frank Hoefflin as a member of Group Management in the newly created position of Chief Innovation and Sustainability Officer. Patricia Heidtman joined Sika as a chemist in 1998. In 2000, she moved to the US, where she held various R&D positions in Automotive and ultimately assumed the role of Vice President R&D and Head of Innovation Management. In 2019, she returned to Switzerland to take on the position of Core Technology Head for Thermoplastic Systems. With her excellent track record in managing diverse global teams and a strong dedication to innovation and sustainability, she will strengthen Sika’s “Enabler” concept, whose aim is to provide solutions that are more sustainable and have a higher performance. Patricia Heidtman graduated from ETH Zurich with a degree in chemistry.

Frank Hoefflin will assume the newly created position of Head Operations, Quality and EHS. In his new role, he will continue to report directly to the CEO but will step down from Group Management.

Sika confirms its strategic targets 2023. The organization will continue to be aligned for sustainable, long-term success, and profitable growth. By targeting six strategic pillars – market penetration, innovation, operational efficiency, acquisitions, strong corporate values, and sustainability –, Sika is seeking to grow by 6%–8% a year in local currencies until 2023. As of 2021, the company is aiming for a higher EBIT margin of 15%–18%. Projects in the areas of operations, logistics, procurement, and product formulation should result in an annual improvement in operating costs equivalent to 0.5% of sales. Sika's overriding sustainability goal is to reduce CO2 emissions per ton sold by 12% until 2023. In addition, the company aims to make all product innovations even more sustainable while at the same time increasing product performance.

For the 2021 fiscal year, Sika continues to expect sales growth in local currencies of 13%–17% as well as an over-proportional EBIT increase. The EBIT margin will reach 15% for the first time, despite a challenging raw material price development and supply chain restrictions.

1 Growth in local currencies including acquisitions.

2 Sales contribution by acquired companies without considering the growth after business combination. Sales growth of the acquired businesses since initial consolidation is included in organic growth.

3 Growth adjusted for acquisition and currency impact. Sales growth of the acquired businesses since initial consolidation is included in organic growth. 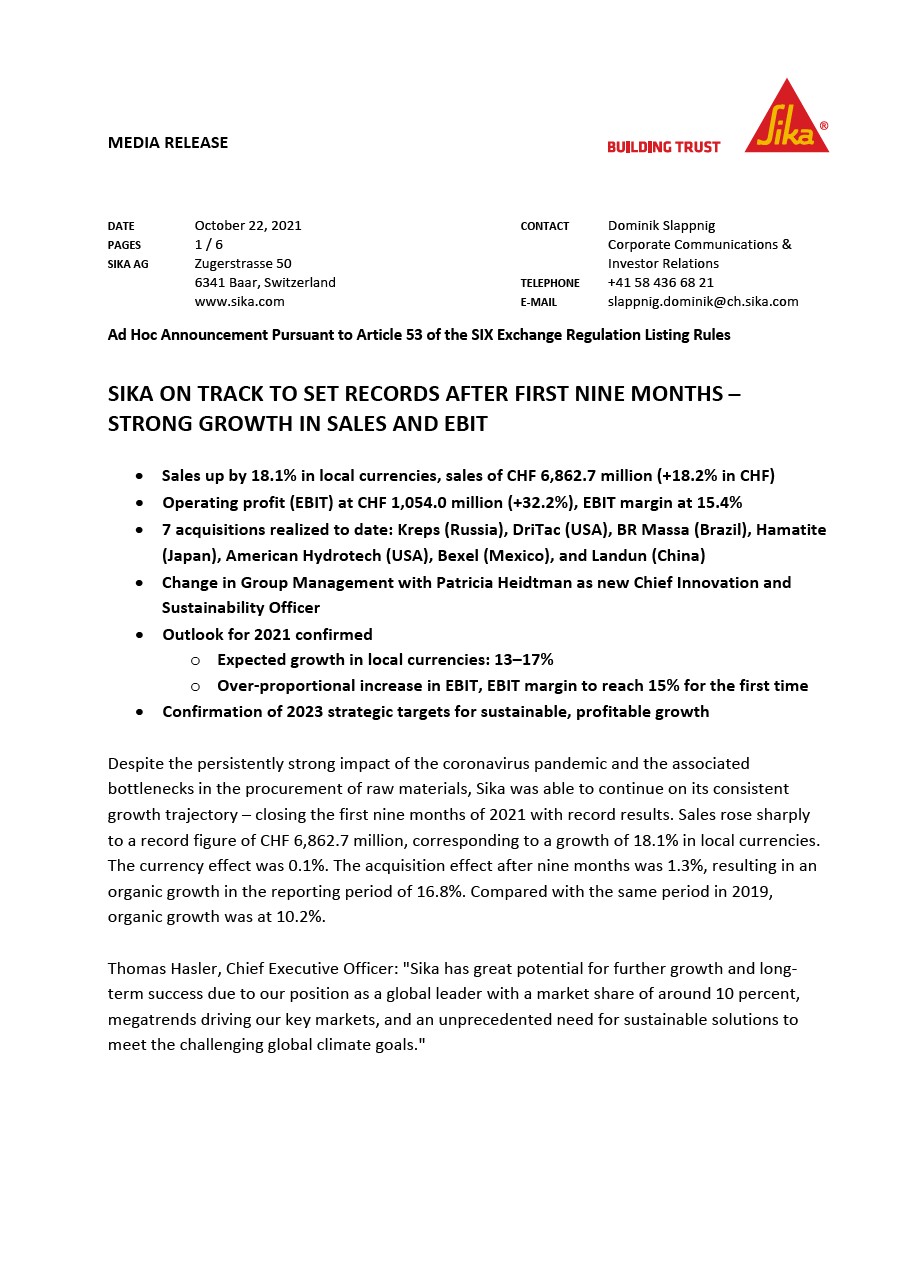 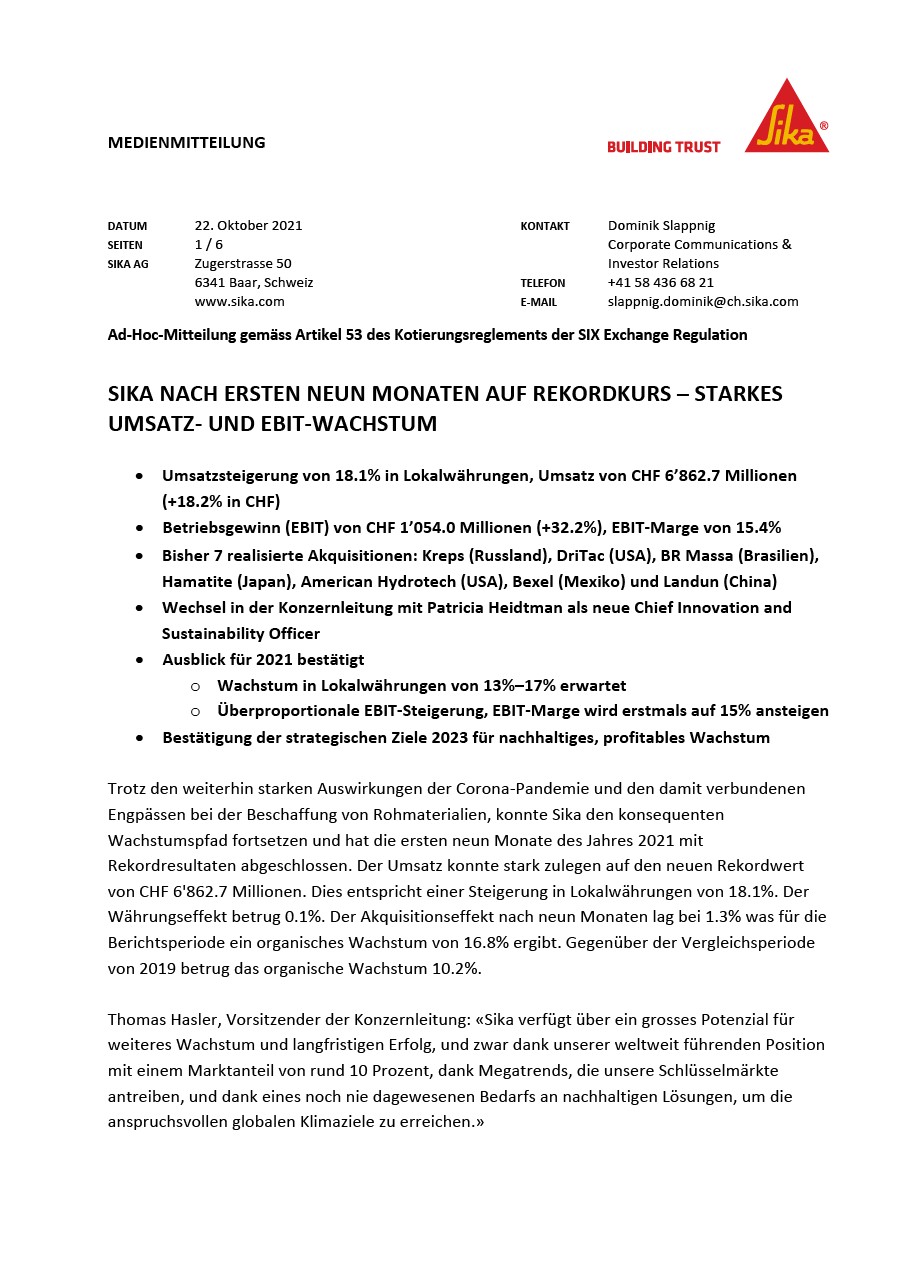 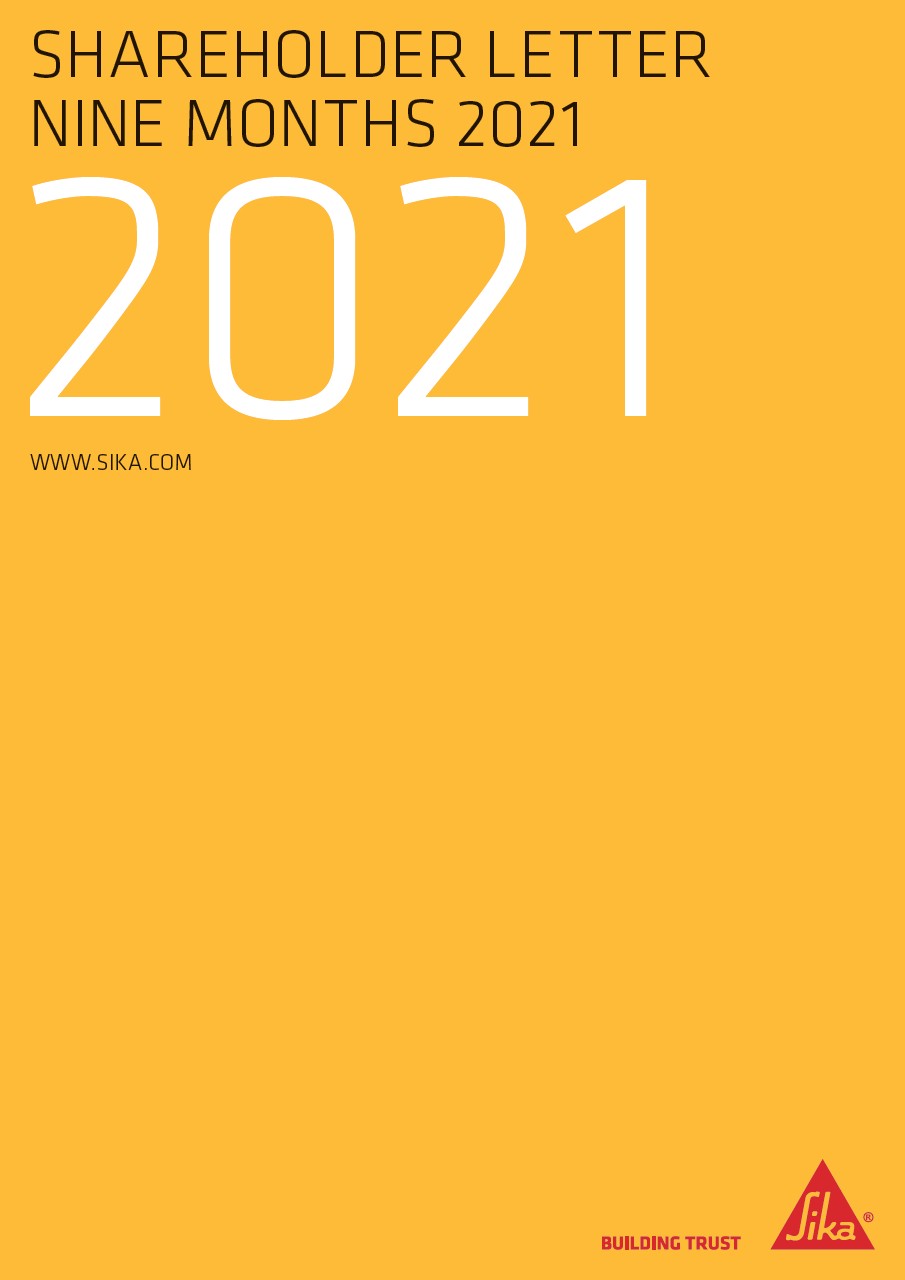 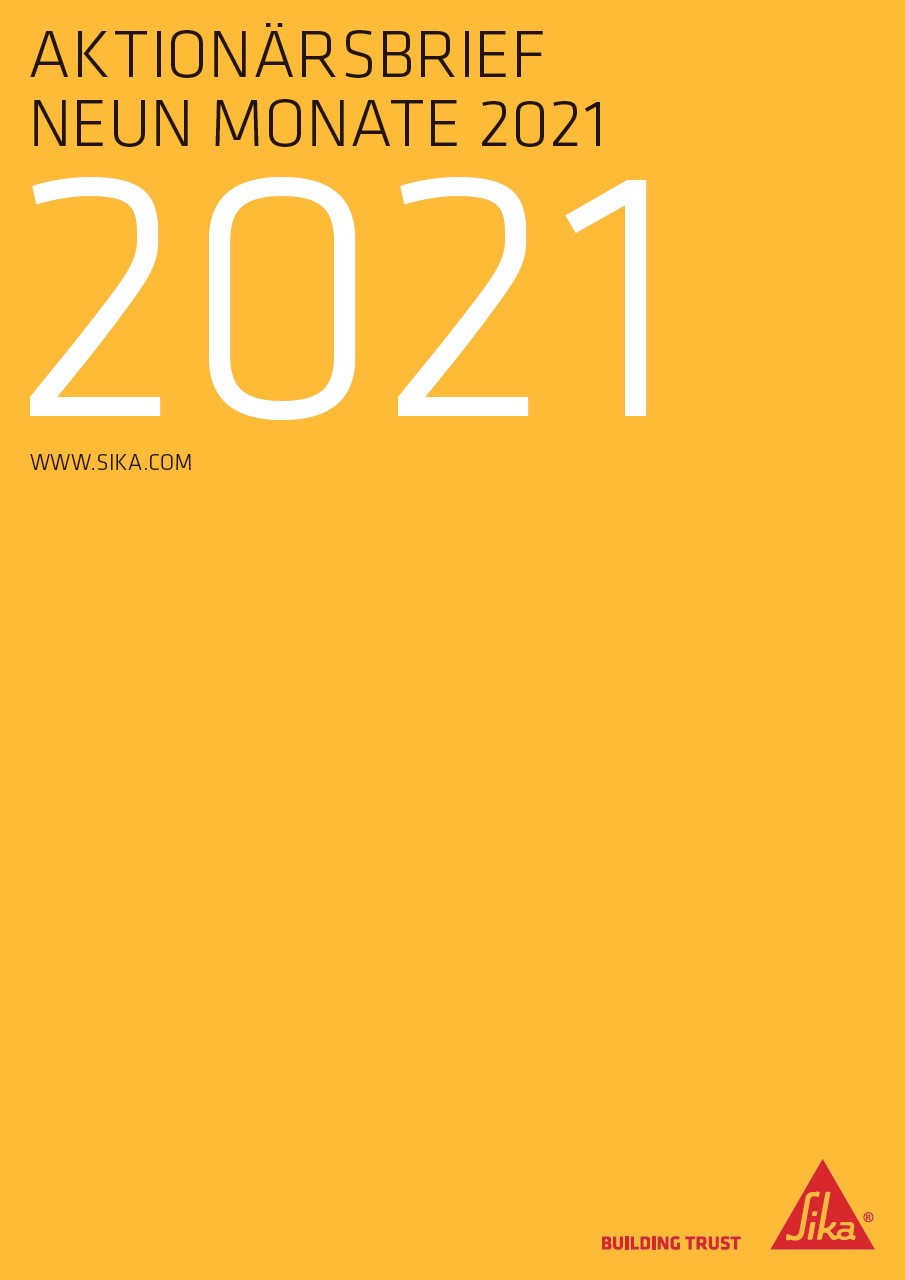 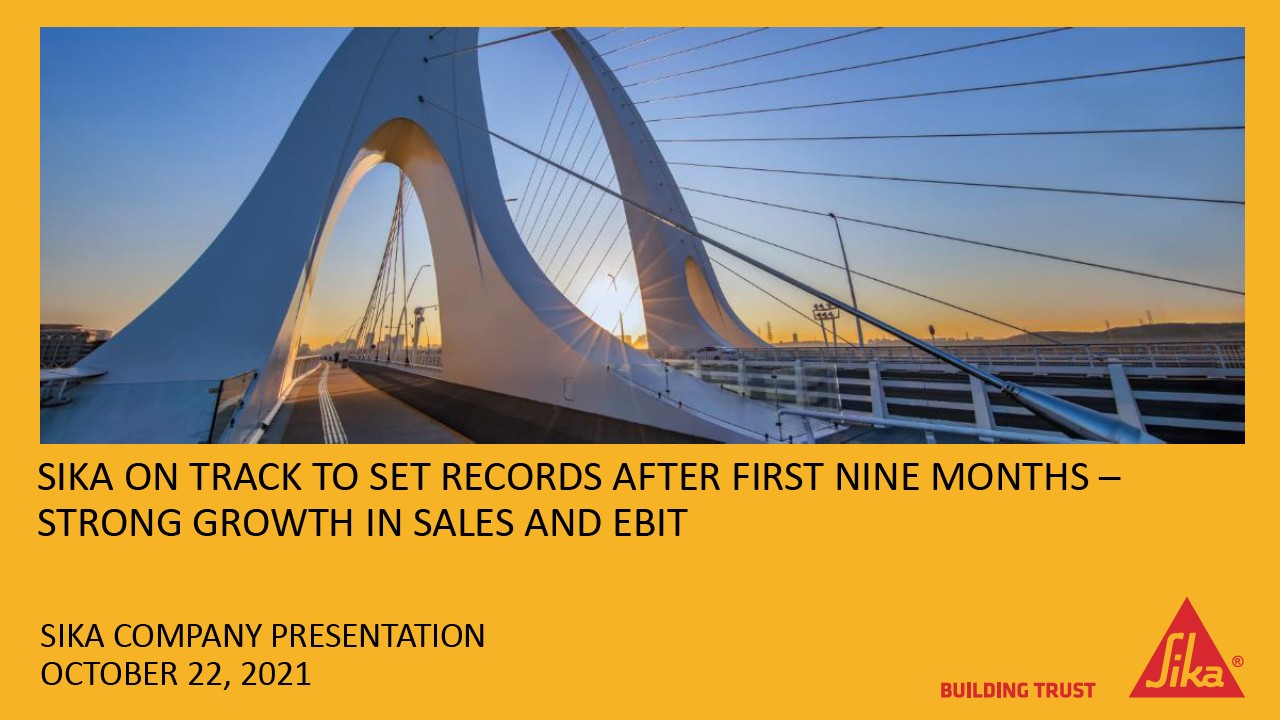